Twin Hills consists of a granted exploration licence (E29/950) located about 30km north east of Menzies and 150km north of Kalgoorlie in the Eastern Goldfields of Western Australia.  The tenement covers an area of approximately 30km2 and extends over about 10km of strike of the greenstone sequence that hosts the excised historical Twin Hills gold mine.  The tenement covers the north and south extension of the high-grade Twin Hills gold mine.

The tenement covers the northern extremity of the Menzies Greenstone Belt, which in the area is a 1km wide sequence of greenstone rocks between two granite plutons at the eastern boundary of the Menzies Terrane.  The sequence consists of a lower ultramafic unit, overlain by basalts and topped by cherts and iron formations.  The northern half of the tenement is largely covered by recent sediments and alluvium. Gold mineralisation is associated with banded brittle-ductile shear zones conformable with the north-south trend of the region and contains quartz carbonate veining. The mineralisation is characterised by biotite, sericite, fuchsite, pyrite and pervasive silicification. 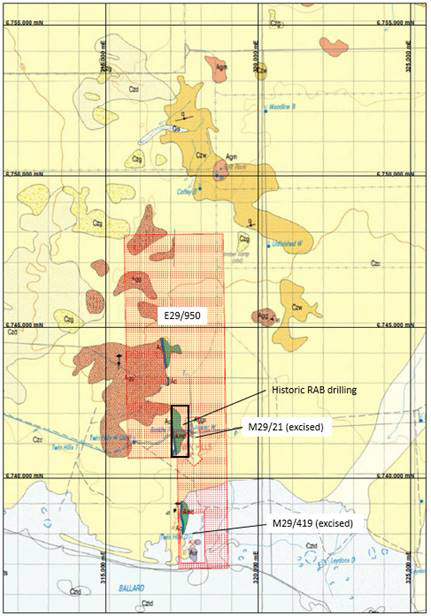 The historical gold workings in excised M29/21 were discovered in 1928 and worked sporadically until 1986.  The area has been subjected to a substantial amount of exploration activity during the period 1986 to 2005, with the majority of this activity on excised M29/21 and to a lesser extent excised M29/419. The work completed has included soil sampling, geological mapping, drilling, resource calculations and underground mining and development (on M29/21).

Golden Deeps NL completed a program of RAB drilling in 1998 on the portion of E29/950 directly adjoining the northern boundary of excised of M29/21.  This program consisted of 71 RAB holes for 1,486m (for an average depth of 21m) and was designed to test a moderate tenor Au-in-soil anomaly trending to the north from M29/21.  Details of the program and hole collars can be found in the Appendix in Table 2 taken from Gold Deeps 1998 Annual Technical Report A57635. The drilling returned two anomalous intersections; 3m @ 0.10g/t from 20m to EOH in TRAB-16 and 3m @ 0.11g/t from 24m to EOH on TRAB-28.  No follow up drilling has been completed to test the down dip or along strike extension of these zones. The RAB drilling undertaken upon E29/950 despite being very shallow and broadly spaced did yield a significant intercept and two anomalous intercepts. With TRAB 044 yielding 8m @ 1.74 g/t from 4m. 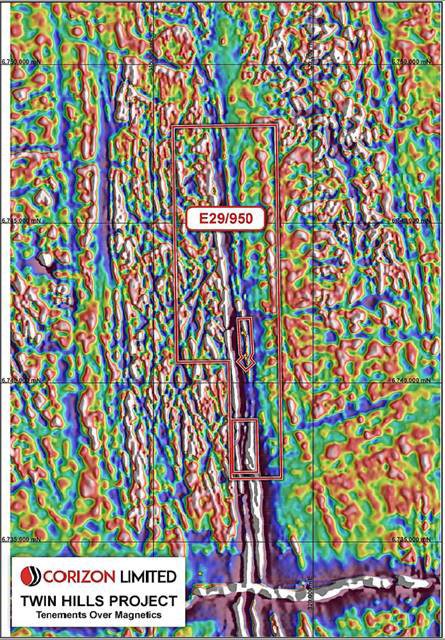 The historical soil sampling in the area also identified a 700m long and up to 400m wide +20ppb Au-in-soil geochemical anomaly immediately south of M29/21.   This anomaly is stronger than that seen in the vicinity of the mine workings within M29/21 and has not been drill tested.

Exploration undertaken by RWG has included compiling all previous exploration results, field investigations and acquisition and processing of existing aerial magnetic data. All previous drilling and soil sampling results have been compiled and where appropriate coordinates converted to MGA94. An index of all available WAMEX reports has also been compiled summarising the various activities. Southern Geoscience Consultants were engaged to acquire and re-process public domain aerial magnetic data, with a series of magnetic and radiometric images produced.

Following evaluation of all past exploration activity on the tenement area EMETALS intends to complete a detailed magnetic survey and modelling of the controls on mineralisation at the Twin Hills gold mine, based on publicly available data, to design a program of follow up exploration.  The large +20ppb gold-in-soil geochemical anomaly identified immediately south of the historical mine workings within M29/21 is a priority for follow up exploration.

The reprocessed aerial magnetics clearly define the prospective greenstone belt and shows structures and demagnetized zones that may indicate alteration in a number of areas; including that of the large +20ppb gold-in-soil anomaly.

Targets generated from the detailed magnetic survey are expected to be tested with either shallow geochemical sampling in the northern portion of the tenement, utilising auger and/or shallow RAB drilling, or RAB/RC drilling of structural targets identified.