The Cookes Creek area is made up of two granted exploration licenses (E46/1095 and E46/1163) about 85km south east of Marble Bar in the East Pilbara of Western Australia that cover an area of 51km2.  The tenement area contains a number of recorded tungsten, molybdenum and base metal occurrences and adjoins Tungsten Mining NL’s (ASX: TGN) Big Hill Project which contains a JORC 2012 Mineral Resource of 11.5Mt at 0.15% WO3 (Indicated Resource of 6.2Mt at 0.16% WO3 and Inferred Resource of 5.3MT at 0.13% WO3) (refer to TGN ASX announcement Big Hill Mineral Resource Update 22nd June 2016).

The Cookes Creek project area is a well-preserved and well-exposed granite-greenstone belt, including granites and enveloping volcano-sedimentary rocks.  It is located in the southeastern part of the East Pilbara Terrane, and within the northern part of the Kurrana Terrane.  The area forms a part of the McPhee Dome (structurally) and comprises dominantly volcanic rocks of the Warrawoona volcanic-sedimentary Group. 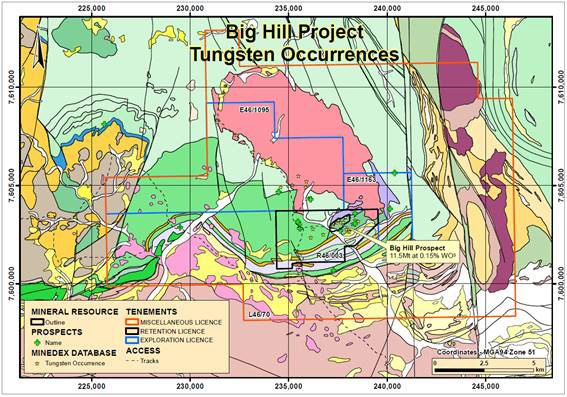 The project area, belongs mainly to the Warrowoona Group (3525 to 3426 Ma) and to some extent to the Kelly Group (3420 to 3310 Ma).  The Warrawoona Group is composed of mafic and ultramafic rocks, with lesser felsic volcanic rocks.  The group is characterised by cycles of extrusions of (ultra)mafic to felsic rocks, which may have formed in an oceanic plateau.  In the project area, the upper part of the Warrawoona Group is exposed and is characterised by the Apex Formation (mafic to ultramafic rocks) and Panorama Formation (felsic to intermediate rocks). The Cookes Creek group of workings is the largest historic producer of tungsten ore in the Pilbara. Most of the production occurred during the 1950’s, and 1960’s. Mining has focused on readily identifiable quartz – wolframite – scheelite veins and eluvial material.

During 1983, KSGM conducted stream sediment sampling across the Cookes Creek project area and identified several stream sediment anomalies.  A stream sediment anomaly on EL46/1163 is similar in size to that associated with the Big Hill deposit and the source to this anomaly has not been adequately explained.  Trenching of the eastern strike extension to Big Hill (to the south of EL46/1163) intersected up to 6m at 0.14% WO3, 10m at 0.09% WO3 and 5m at 0.19% WO3.  These trenches are located within 160m of the EL46/1163 and mineralisation is open to the northeast onto EL46/1163.  Potential exists to extend the Big Hill deposit onto ELA46/1163.