The Poona Project is prospective for lithium-caesium-tantalum “LCT type” pegmatite mineralisation hosted within the greenstone belts of the Weld Range where they are intruded by the younger Telegoothera Monzogranite and its various intrusive units. The Company acquired E20/896 and E20/885 (90%) on 18 June 2020 and Callies Soak E20/854 in August 2020. It also has two substantial exploration license applications (E20/963 and E20/964). 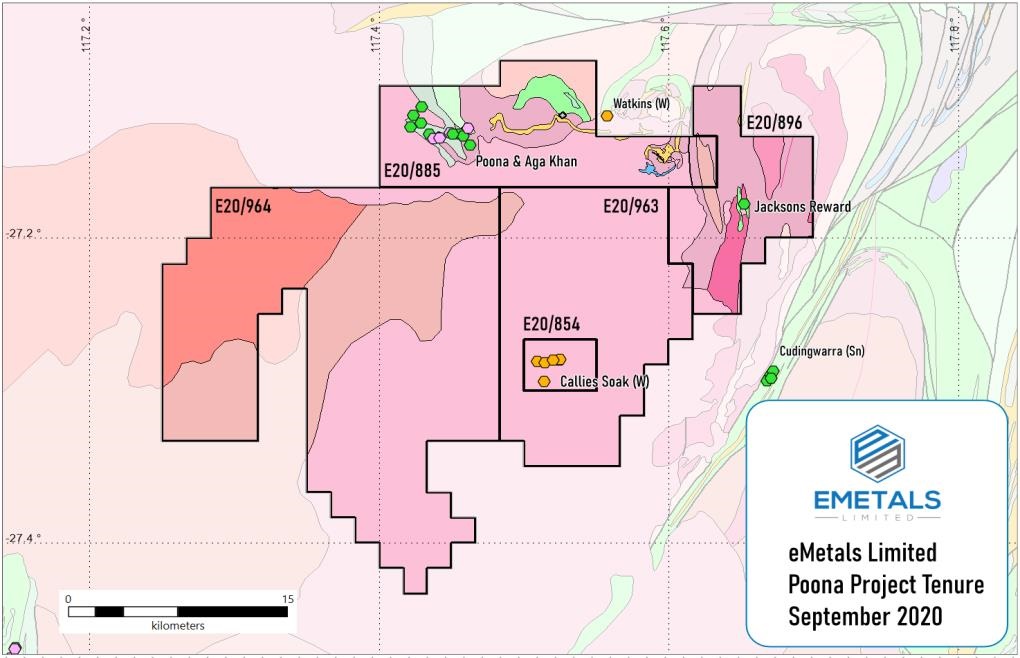 During the period infill soil sampling was conducted on tenement E20/885 to bring the sampling density up to 400m x 50m across the Ni-Cu-PGE prospective stratigraphy of the Mughal Prospect and extensions. This involved the collection of an additional 1,950 soil samples and 50 rock chip samples during the period. eMetals exploration of the Poona Project has now totalled the collection of 280 rock chip samples and 2,600 soil samples

Results for soil sampling across the Mughal Prospect have defined a >3.4km strike of Ni-Cu-Co-PGE enrichment. The anomalous zones are depicted in Figure 2.

Soil anomalism at Mughal shows a substantial PGE and Cu enrichment associated with a stratigraphic contact between mafic and ultramafic schist. A substantial nickel and cobalt anomalous zone overlies the ultramafic schist, with a peak geochemical value of 0.15% Ni, 240pm Cu and 380ppm Co. EMT’s interpretation is that this may represent a nickel sulphide mineralised intrusion within the ultramafic schist, underlying a Cu-PGE enriched mafic intrusive zone. This may represent a similar arrangement of rock types and geochemistry to the Parkes Reef (Gnangooragoo Intrusion) where Podium Minerals has identified a 1.3M ounce platinum-palladium resource and attendant Ni-Cu sulphides.

EMT is planning a moving loop EM program to be undertaken during the second half of the year seeking to define conductive bodies or zones within the ultramafic schists which can then be tested by drilling. The Company has engaged geophysical consultants to plan and execute this work and will update the market as work progresses. 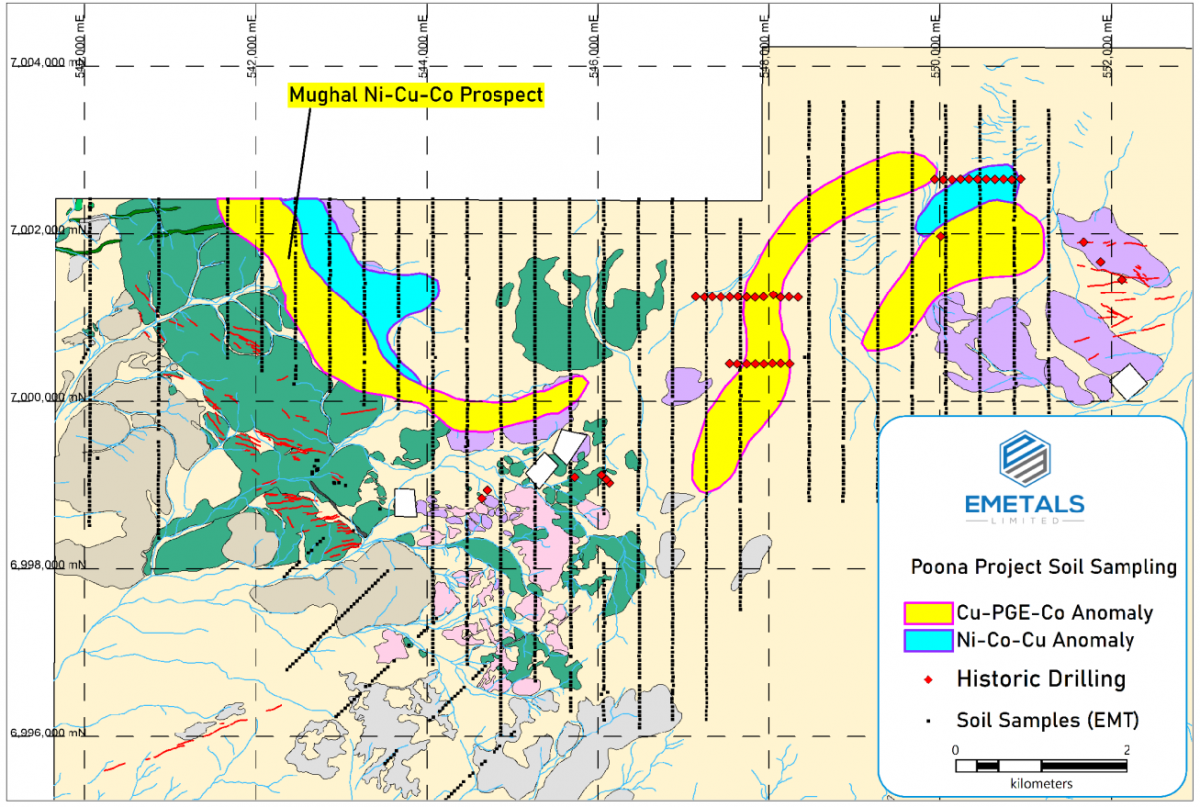 Rock chip sampling during the period has involved reconnaissance traversing of the Kyarra exploration license applications (E20/963 and E20/964), including investigation of a ~23 kilometre long Proterozoic pyroxenite intrusion which is enriched in Ni, Cu, Co and PGE. The intrusion was confirmed to be ultramafic in character in the western portions, with rock chip sample assays awaited.

Mapping, rock chip sampling and traversing of the Callies Soak tungsten occurrence (E20/854) was undertaken during the second quarter. The Company has identified significant extensions of the host shear zones, tungsten-prospective greisen alteration and pegmatitic structures along strike of the known tungsten occurrences. This includes a significant pegmatite swarm at the western end of the pyroxenite intrusion. Several rock chip samples were taken to test these zones for anomalous geochemistry and assay results are awaited.