Nardoo Well is a single granted exploration licence (E09/2114) located about 250km east of Carnarvon in the Gascoyne region of Western Australia and covers an area of 131km2.  Access is gained via the sealed Carnarvon- Mullewa road to the east of Gascoyne Junction and then 90 km north on local gravel roads.  The tenement area contains a number of recorded tungsten and base metal occurrences and is situated on the Mount Phillip, Eudamullah and Yinnietharra pastoral leases.

The northeast half of the project area is dominated by fine grained metasediments of the Leake Springs and Pooranoo Metamorphics (Figure 2).  The Leake Spring Metamorphics (previously the ‘Morrissey Metamorphic Suite’) is a package of siliciclastic metasedimentary rocks, with some intercalated calcsilicate rock and amphibolite, which outcrops across the northern two-thirds of the Gascoyne Province.

To the southwest of these metasediment the sequence is intruded by the Thirty Three Supersuite, a foliated, leucocratic, biotite– muscovite (–tourmaline) monzogranite and granodiorite, as well as a belt of muscovite–tourmaline and rare element bearing pegmatite along the northern edge of the Mutherbukin Zone.

There are a number of pegmatites and quartz veins that are probably derived from granites belonging to the Thirty Three Supersuite.  Some of these dykes contain abundant concentrations of rare earth elements (e.g. Bi, Be, Nb–Ta) and have been the subject of small-scale mining.  The tantalum-niobium zoned pegmatites are present within a 65 kilometre by 15 kilometre west northwest-trending zone which passes through the southern part of the project area, with dykes up to 20 metres wide to shallowly dipping sheets reaching 200 m in thickness. The dykes and sheets are typically zoned, and contain cores of massive quartz. 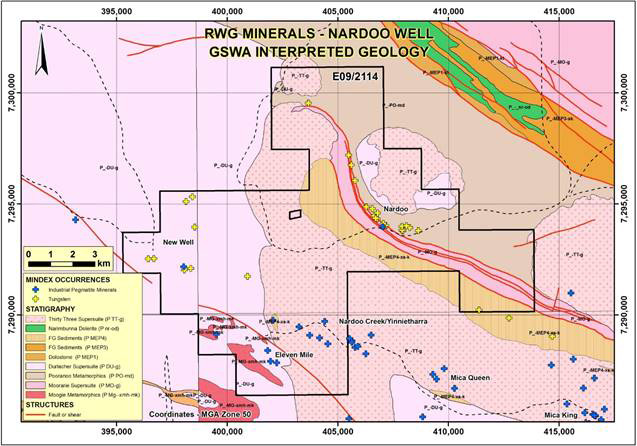 Skarns are located in two stratigraphic horizons within a partly calcareous micaceous quartzite, are fairly continuous over a length of several hundred metres, with pods of higher grade mineralisation.

Mineralisation associated with amphibolites tends to occur as lower grade disseminations, in patches and elongated pods.  These amphibolites are semi-continuous at several stratigraphic levels within the staurolite schist unit.

The Nardoo Well area, which had previously been partially explored by Whim Creek Consolidated (WCC) from 1980 to 1982, contains two styles of tungsten deposits. The main scheelite mineralisation occurs as high grade but patchy garnet-epidote vesuvianite skarns lenses within calcareous quartzites (channel samples up to 3m @ 1.64% WO3) and disseminated within para-amphibolite over a strike length of 5-6km. A total of 3,734m in 192 vacuum holes were completed by WCC over the Quartzite, Main and Northern Skarns, with most drilling being relatively shallow between 15-35m. Drilling experienced poor sample recovery and results did not repeat the very encouraging surface observations.

In 1982 Westralian Sands Ltd looked briefly at the calc-silicate hosted tungsten potential of the ground, covering the western margin of E09/2114. Using mapping, and night (UV) lamping, channel and rock ship sampling they identified areas of tungsten that returned values of 0.35% to 7.72% WO3 that were not followed-up.

From 1992 to 2003, Rare Resources NL investigated the elluvial and alluvial potential of the area for tantalite mineralisation.  This work was on a very small scale, close to Beryl Hill and Bismuth Hill.  Two Honours projects undertaken on Rare Resources’ prospect; one a structural study and the other a mineralogical study (the latter is particularly useful), are contained within the 1992 annual report.

Fieldwork by Mincor began in April 2006 and finished in December 2006. A staged program of gridding, mapping, rock chip and channel sampling, petrography, stream sediment sampling and reverse circulation drilling was conducted. The program consisted of 51 holes for a total of 1,333 metres. A summary of the drilling activities can be found in the Appendix. With the exception of three holes drilled into a Magnetite skarn, all holes penetrated staurolite-biotite-garnet schist on the footwall side of the host quartzite. Results from Mincor’s 2007 exploration report (A75498) show results of 1m @ 5485 ppm WO3 and 1m @ 1.12% WO3 from holes NRC 17 and 34, which were drilled adjacent to and along strike from the Main Skarn “Bonanza” pod respectively. Eighteen samples from twenty-two holes returned values greater than 100 ppm, with six holes returning tungsten values greater than 500ppm. No hole had more than one value >500 ppm W. The drilling failed to establish the strike or depth continuity of the high-grade zones seen and sampled on surface in the principal skarn.

Mapping and sampling completed by RWG during 2016 identified a zone of pegmatite over a strike length of 2km. This pegmatite is open along strike to the north east and contains anomalous LiO2 of up to 320ppm. Significant tungsten mineralisation of 3.4% WO3 in a rock chip sample was also achieved in an area previously explored for tungsten.

Given the success of Arrow Minerals Limited’s drilling programs on adjacent tenements, as well as the promising results from RWG’s initial soil and rock chip sampling, the project area is deemed highly prospective for pegmatite hosted Lithium/Niobium/Tantalum mineralization within the 8.5km of strike of the Thirty-Three Supersuite contained within the tenement. Further soil and rock chip sampling should be undertaken around the identified highs from the RWG’s first, broad spaced soil sampling program, in order to better define the anomalies and aid in the targeting of a reverse circulation drilling program.